Yesterday morning the dredge MUNSON of Belleville, which spent some days dredging for the launching of the barge MINNEDOSA, left for the bay city in tow of two small tugs. She had been leaking before leaving but it was thought that it would not amount to much. When opposite Lemoine’s Point and when the crew least expected it, she sank to the bottom, in about 100 feet of water. The tow lines were cut in order to save the tugs. The dredge went down beam end’s first. The cook, in the kitchen at the time making preparations of dinner, was told to come up but before he had run to the stairway the vessel was underwater.
The fellow went down but soon came up and was rescued by the crew in an exhausted state. He stated afterward that the suction from the dredge going down kept him from coming to the surface. He had to wait until she reached the bottom. A lot of timber on her deck came up after she sank.

DREDGE MUNSO SINKS AT KINGSTON.
Kingston, May 1. — The dredge MUNSON owned by E.A. Munson of Cobourg sank yesterday. The calamity was very sudden, as four minutes after the craft was seen to be in trouble, she sank like a stone. The three men who were on board were saved, although one of them, Wm. Green of this city, was carried down 35 feet. Loss estimated at $15,000 on which there is no insurance. As the water is 130 feet deep where the accident happened the prospect of recovering anything from the wreck is very doubtful.

It is likely an attempt will be made to raise the Dredge MUNSON, sunk off Lemoine’s Point.

The dredge Munson was based out of Belleville and was used for maintaining adequate water depth at harbor entrances or similar contracts. One of the most significant contracts secured for the Munson was to assure that the new schooner-barge the Minnedosa, would have an uneventful launch at Kingston on Saturday, April 26, 1890. The Minnedosa was a notable contract as she was the largest four-masted Canadian sailing vessel ever built on the Great Lakes, and owned by the Montreal Transportation Company. She measured an amazing 250 ft, with a 36 ft beam; she boasted finely modeled lines that made her the talk of any seaman who laid eyes on her.

Unfortunately, the most important job for the little dredge Munson turned out to also be her last. She completed her job of dredging Kingston harbor on Wednesday, April 23, 1890, and taken in tow by the tug Emma Munson along with two scows, to do construction work on the Bay of Quinte bridge in the town of Rossmore. Just off Lemoine’s point she was noted to be listing to one side, she had been leaking before leaving Kingston. Then when least expected she began to sink just opposite Lemoine’s point in 110ft of water. The towlines were quickly cut and she sank beam-ends first; the cook was onboard cooking dinner and scampered up after being called. He was rescued from the cold water, quite exhausted after having had to wait till the suction abated on the sinking dredge when she hit bottom until he could surface.

The men aboard the dredge lost everything, she was valued at approximately $15,000, with the case of the sinking attributed to a plank having sprung on the bottom of the dredge. She apparently sank within 4 minutes of her listing first being noted. Diver Rick Neilson relocated the dredge Munson in 1981. Many of the artifacts have been donated to the Hastings County Museum in Belleville, Ontario, creating the beginning of their Marine heritage section.

Present-day divers enjoy this well preserved wooden dredge, which sits upright in approximately 110 ft of water. Her most spectacular features are the steam shovel and the fact that she has 2 levels. The arm, which supported the shovel, was at one point entirely upright, but is now only partially articulated and rests on the lakebed with the shovel. A collection of plate’s bottles, cups, and bowls, is on display for the visiting diver to enjoy. The limitations on this wreck are most obviously the depth; therefore air consumption and time must be carefully monitored. A light layer of silt covers this wreck so good buoyancy skills are a must. This wreck is striking in its presence as it greets the diver’s eye on decent and is sure to remain a favorite for all that visit her. 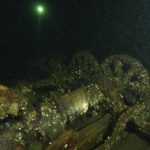 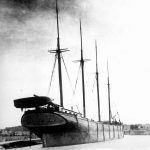 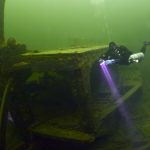 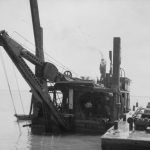 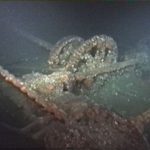