Located by Mike Ryan & Chris McCartney in 2004. A non contact survey was conducted by TEST from the Great Lakes Explorers Club, including SOS president Brian Prince.

The Barge is located on the east side of the Island in 121 ffw.  So over the years rumours of how and what barge it was and it was speculated it was stored underwater for the winter and never recovered.  2018 a newsletter from a retirement community provided some information about a barge and with bonus sentence about the Airboat as well located in the area.

Although not 100% but pieced together rumours, odd memories and stories, It may be the Petro barge that was used to haul rocks from blasting the bridge embedments in Ivy Lea.  Barges during that area unless built for the government or on foundations of older commercial boats rarely get mentioned.  A photo collection in the Leeds County Museum has a photo of Peter’s Barge and at the footings on the Canadian side.

Pratt Co. the construction lead out of Montreal had a barge go out of exsistence 1937. They had just finished cleaning up as the Bridge had opened in Apr, and seeing the Barge was underwater for the opening and not needed. It was forgotten about until Mike & Chris stumbled across her.

Here is the best candidate for identification although not a positive identification.
Name of Ship:  L.C. AND S. NO. 1
Year of Registration:
1908
Type of Ship:
Wood Sailing Scow
Port of Registry:
Montreal, Quebec
Gross Tonnage:
52.9
Remarks:
Official Number:
126163
Reference:
1686|42
Volume:
1686
Other Reference: 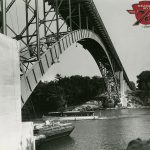 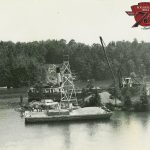 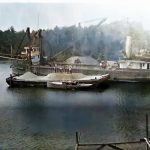 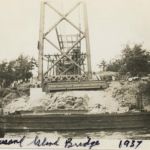 What are your Feelings

Still stuck? How can we help?

How can we help?